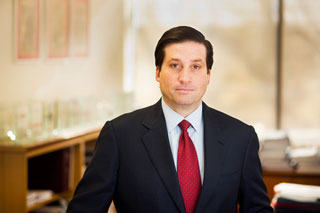 Michael Urfirer is Chairman and Chief Executive Officer of Stone Key Group.  Prior to founding Stone Key, Michael was a Vice Chairman of Investment Banking and Global Head of Strategic Advisory Banking at Bear, Stearns & Co. Inc.  He was a Senior Managing Director of the firm, served on the Investment Banking Department Operating Committee and was a member of the firm’s Board of Directors.

For more than 30 years, he has advised technology companies in areas from the Aerospace/Defense industry to the Enterprise Software and Information Services Sectors on a wide variety of strategic and financial issues.  In both 2012 and 2013, Defense News named Michael one of the Top 100 Most Influential People in U.S. Defense.  In 1997, Fortune magazine selected Michael as one of America’s ten “most well-connected and effective M&A bankers.”

Michael received an M.B.A. from the Stanford Graduate School of Business and an A.B. in Psychology and Social Relations from Harvard College.